To hear that Hospital Records have reached yet another milestone in their illustrious lifespan will come as a shock to no one – we’re talking about a music label that has been at the forefront of the drum and bass scene for many years now – but the weekend before last (18-19 September) was something truly special. It was the introduction of a new London festival, Hospitality Weekend In The Woods.

Taking over from the previous festival, Hospitality In The Park, which had been steadily growing over its four year venture, HWITW provided D&B fans with somewhat of an upgrade. For two days, Beckenham Place Park in South-East London was transformed into a musical oasis where it really did feel like you were in a bubble. Surrounded by huge trees, the site was beautifully hidden from the outside world. It was like we had stumbled across a free party, but with the security of an official event and friendliness of the Hospitality family.

It was a strange feeling, but it made complete sense. This was the first festival outing for many people after being locked up for 18 months, so there was a care-free feeling around the site – one where people just wanted to dance, enjoy life and celebrate being free. There were no fights and no dramas. We were all there to rave the lockdown cobwebs away. 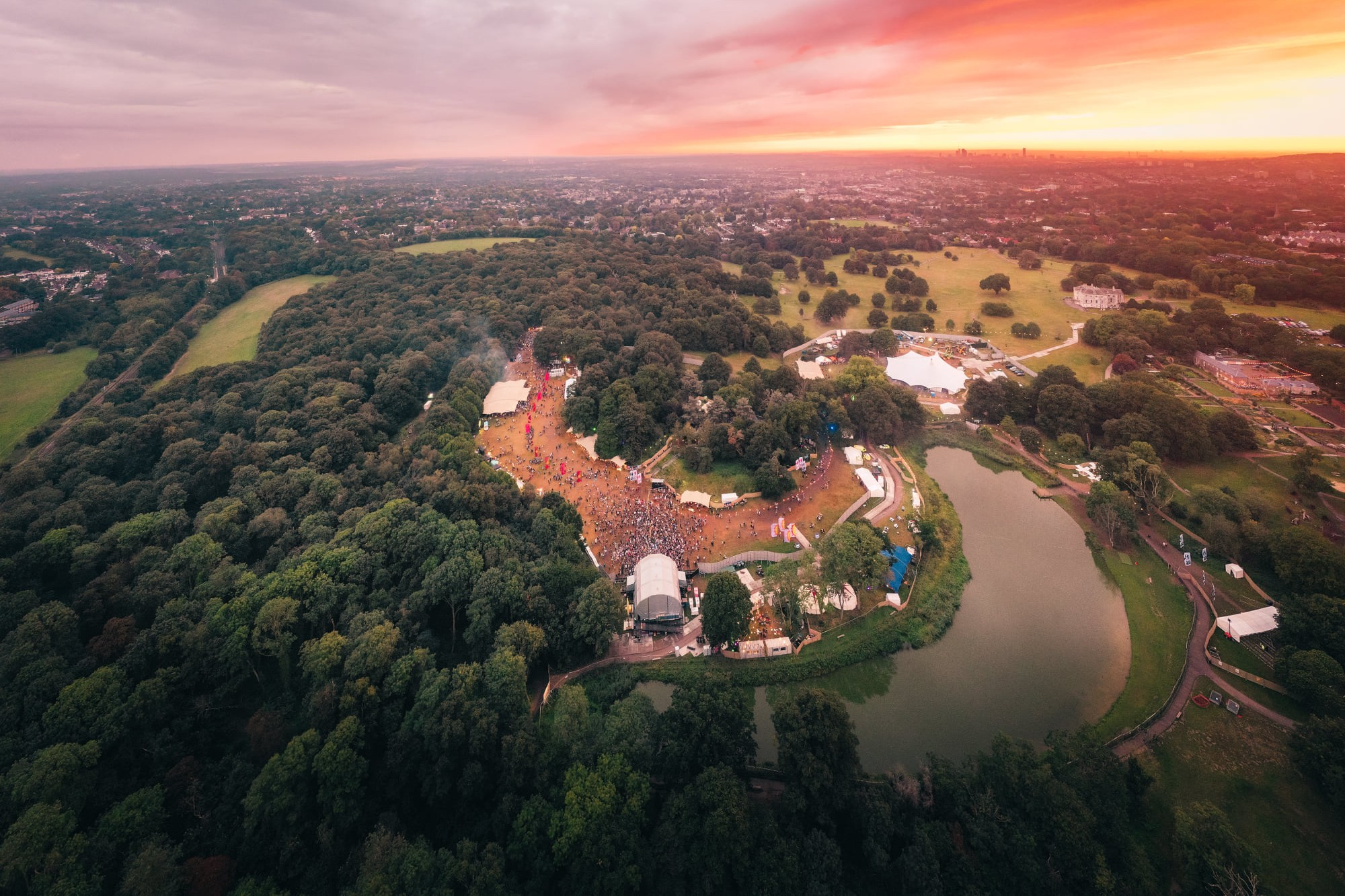 The Saturday of the festival was testament to this. Usually during the early afternoon of any festival it's quiet at the stages, but this was not the case here, as anyone who saw Something Something on the Let it Roll stage will attest. People were skanking like it was their last rave before lockdown… It was a beautiful sight to see so many people smiling and remembering what it was like to feel bass shudder through their bodies.

And relish in the bass everyone did – as one of the best, and most commented on aspects of the festival, was the incredible sound. Anyone who attended the first HITP will be aware of the sound issues the festival had; the Let it Roll stage back then was a complete no go with tinny sound, and eventually only one working speaker.

But Hospitality got it bang on this time. The Let it Roll stage was pumping and the sound was unbelievably crisp, which was vital when you had K Motionz, Kanine and AMC all tearing up the stage. The sound quality was the same throughout the festival site, and it definitely had a positive impact on the mood of the ravers – for too long we’ve been sitting at home listening to our favourite DJs on cheap speakers.

The mood around the festival site was a joy to experience. Hospitality events have a history of attracting the right crowd, but it will come as a surprise to no one that Hospital had a rocky time during lockdown and lost the support of some ravers; from having to cancel Hospitality On The Beach and move it to a new location (which was met with sadness from Tisno regulars) to being put under a microscope by the public over their actions surrounding diversity. But HWITW felt like a turning point. A moment where fans, artists, and even members of the label, reignited their love for the Hospitality brand. 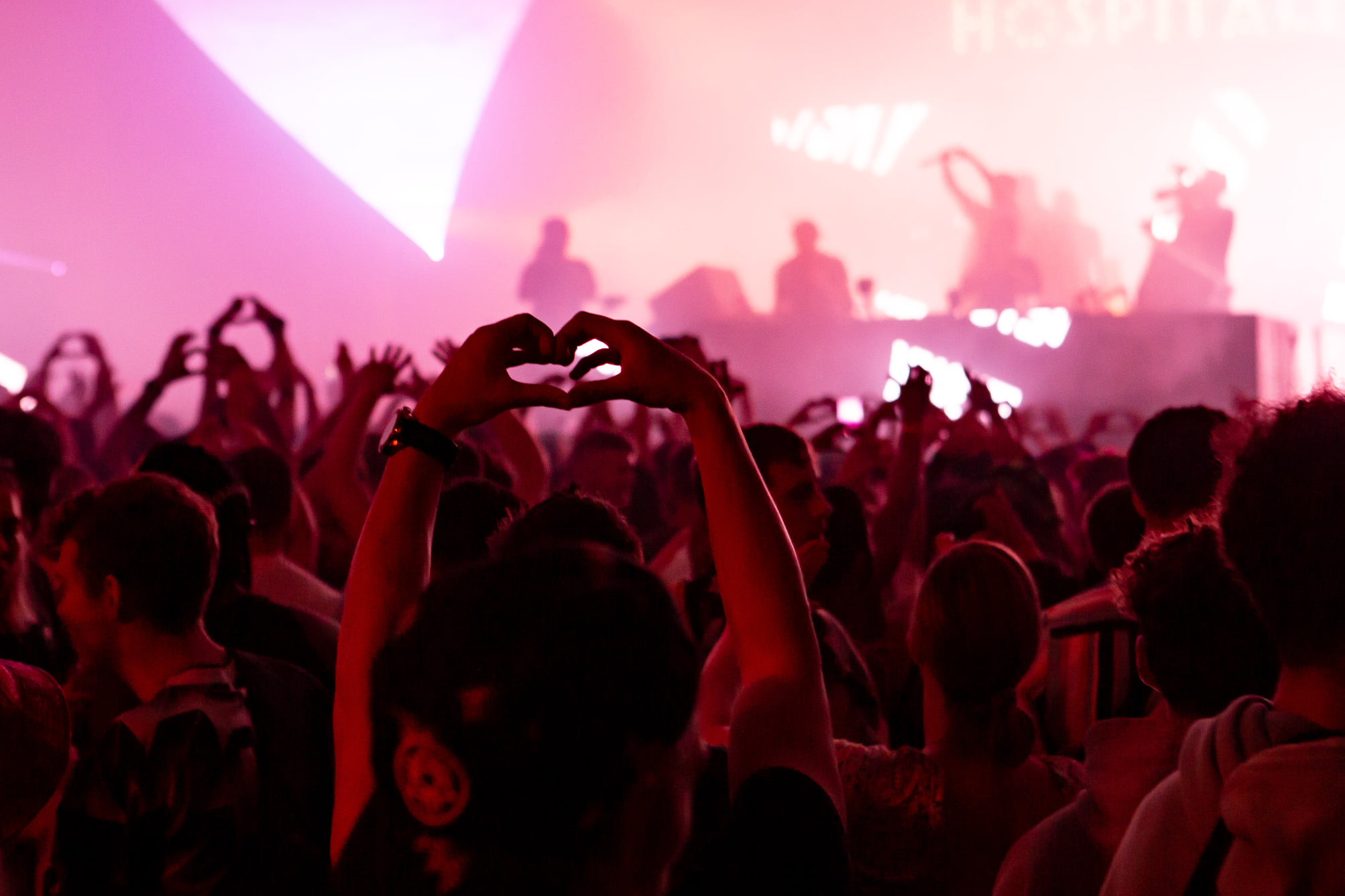 It was hard not to admire the event when you consider how mammoth the line-up was. From Kings of the Rollers curating a day of B2B madness at the stretch tent, with ridiculously good pairings including Bryan Gee B2B Ray Keith B2B Micky Finn and Bassman, to Rupture taking over the woods with a homage to jungle featuring Dillinja, Krust and Digital, to Calibre curating a dream liquid line-up at the bunker with Fabio, LSB and DJ Marky. No matter what style of D&B or jungle you liked, there was a stage for you.

It was the latter of those stages that was grooving all afternoon. With a DJ booth looking like an actual bunker, and a dancefloor feeling like a battlefield at times with people flooding in, the whole afternoon here was a unique vibe – particularly for DJ Marky’s set, who rolled through feel good classics like Boosta & Atmos T’s 'All My Love' (feat. Nicole), while GQ and Collette Warren hosted the mics.

It was a pretty emotional set for me, and I’m sure many others, because this trio was the last act to play Motion in Bristol before lockdown commenced March 2020 – one of the final UK drum and bass events. I can still hear the words of GQ saying “after tonight, we don’t know if there’s going to be anymore parties, so tonight, we’re going to party like it’s New Year and Christmas day all rolled into one. Are you ready?”.

We weren’t ready for what was to come, but we were ready for a return to the rave. It’s this feeling of being back doing what we love that ran throughout every stage at the festival. Artists were going harder than usual, there was no such thing as a warm-up set, and crowds were creating football stadium levels of noise. Even over at Hospitality’s main stage you had Etherwood reeling through remixes of his classics including 'Spoken', 'Souvenirs' and 'Light My Way Home', which never usually happens. Typically, Hospitality’s London festivals mark the end of the festival calendar each year, but with the way the fans and artists approached the occasion, this felt like the beginning.

As day turned to night at HWITW, things ramped up another gear with clashes coming thick and fast across the site. With Calibre, KOTR, Koven and Metrik all on closing set duties, it was tough to choose who you wanted to see at time – always a good problem to have!

One of the best atmospheres of the day came from Metrik’s performance on the main stage alongside Dynamite MC. Throughout lockdown, Metrik kept spirits high with his lockdown livestreams where a passionate community tuned in weekly, so this set felt like the culmination of a mini narrative where fans came together to celebrate the release of his Ex Machina album, and the return of live music. 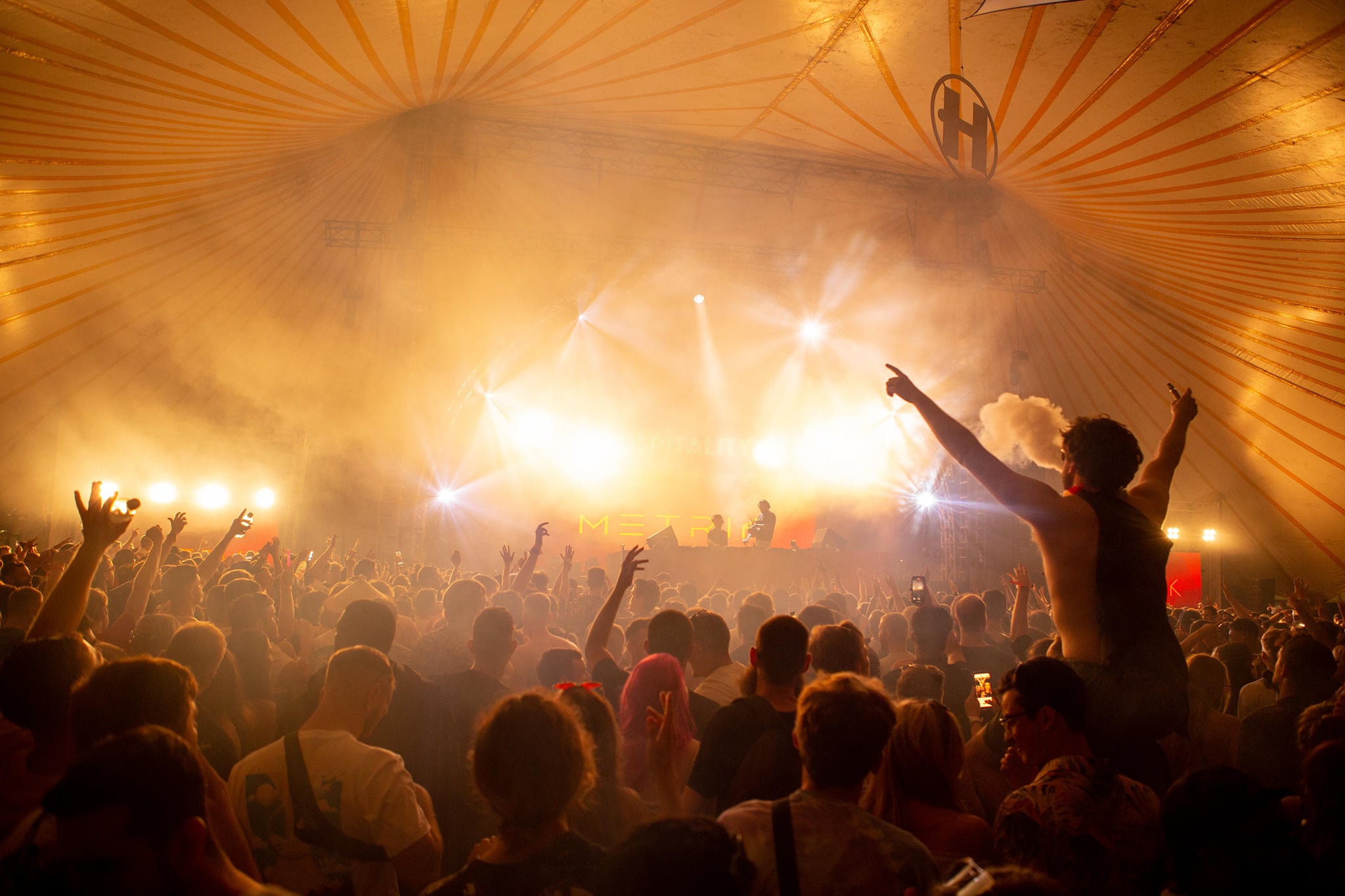 Celebration was undoubtedly the theme of day two with a range of special performances and moments providing rays of sunshine amidst a day where the weather was anything but sunny... But is it even a festival without a bit of rain?

While day one celebrated returning to a festival, day two felt more like a homage to the people and achievements of a genre that is constantly pushing itself to do better. From celebrating the next generation of talents making their mark on D&B to witnessing historic moments unfolding.

Just like day one, Sunday was filled with gems across the site. Let it Roll made a return with a heavy D&B offering featuring Black Sun Empire and Noisia, Playaz took over the stretch with the likes of Hype, Hazard, Brockie & Det, the bunker played host to Critical favourites such as Halogenix, Hyroglifics and Kasra, the woods saw Soulvent Records curate a takeover, and the main stage was home to another Hospitality showcase.

There was something unique about the vibe of the woods all day. Maybe it was the stage being located in a hidden woodland in the eye of the festival site, or maybe it was the selection of treats Soulvent had in store. The US-based Winslow playing his first international set, Nu:Tone B2B Keeno B2B Hugh Hardie B2B Makoto – this line-up was a sight to behold.

But it was Riya laying down a live performance in the afternoon that created one of the festival’s special memories. An undeniably talented vocalist who has constantly pushed to be seen as more, Riya owning the stage with her singing, hosting and DJing was a milestone for the scene – not just for women in D&B, but for vocalists too.

Especially of late, we’ve seen many vocalists put their stamp on the drum and bass scene. No longer are they just supporting names on a line-up, they’re quite rightly taking centre stage. Riya, Ruth Royall, Collette Warren, Karina Ramage, Amy J Pryce, Rider Shafique – HWITW sent a message to the scene that we need to celebrate the vocalist.

The special sets continued throughout the day with Let it Roll hosting an insane B2B2B between Bad Company UK, Ed Rush & Optical and Audio, while Noisia closed the day with one of their final London performances – which Skrillex made a surprise appearance for. But one of the best moments came from the Hospitality stage, where Netsky provided an epic finale to the festival with a ‘10 years of Netsky’ set.

During lockdown, the news that Netsky was returning to Hospital to release his third album Second Nature, a decade on from his first release with the label, was an announcement that filled many people with tears. But we weren’t able to fully celebrate it: until now.

As Netsky reeled through his classics, you could tell emotions were running high for him. From using the mic to comment on mixdowns of his old tracks, to reflecting on how it was his first time playing at Hospitality London since coming home to Hospital Records – the event where his journey with the label began.

There was a special feeling in the air as Netsky closed the festival with his track 'Hold On' (feat. Becky Hill). Not only was it a track with a message conveying the way many of us had been holding on for a return to live music, it was a moment made extra special by Netsky inviting the Hospital team on stage to thank them for what they’ve done for him.

It was the ideal ending to a festival in which Hospital Records deserve so much praise for what they accomplished. Roll on the next milestone…