The third and final day of All Points East began with a gloomy start. Whether the haze was the dust settling from the days which came before or pathetic fallacy for sore heads, across the park, the reverb-heavy riff of Foals’ 'Inhaler' rang out, carried by the cool breeze; early risers treated to a free soundcheck gig.

The Nightingales kicked things off with thunderous drums rumbling from the North Stage tent. With the band obscured from view from the outside, early attendees were drawn inside out of curiosity and greeted by an eclectic and breathless set, full of surprises.

Directly opposite, Chloe Robinson kicked the 6 Music stage into action, which became the beating heart of the whole festival site. Undeterred by the time of day, she delivered a bludgeoning selection of electro and techno. LSDXOXO’s 'Hateshopping', an edit of the late SOPHIE’s 'Faceshopping', into Blenk’s 'Vibration' set the pace early and felt like an act of defiance among the day’s band-heavy programme.

In complete contrast, Mercury Prize-nominee Arlo Parks performed her second set of the weekend. Her soft voice seemed to embrace the whole crowd as she rolled out all the hits from her debut album Collapsed In Sunbeams. The melancholy single 'Black Dog' was a big crowd pleaser, particularly as it was performed with a more rhythmical backbone to allow the crowd to dance. 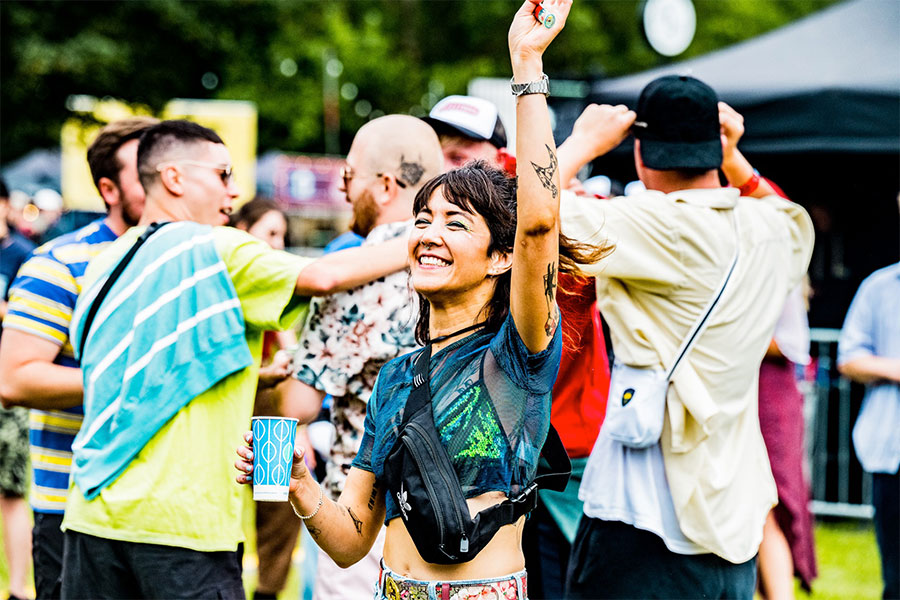 Flyte took the stage and surprised the crowd with backing from Bombay Bicycle Club’s drummer Suren de Saram, who stepped in last-minute for Flyte’s drummer Jon Supran whose partner had gone into labour.

Eventually, the rest of North London’s Bombay Bicycle Club took to the stage, reuniting with their drummer to deliver a showcase of their five albums. Every track seemed like a highlight as the crowd provided backing vocals for the entire set, from their early hits such as 'Always Like This' through to more recent singles 'Carry Me' and 'Eat, Sleep, Wake (Nothing But You)'. The set was capped by a guest appearance by singer Rae Morris and glorious confetti cannons; a treat knowing that they didn’t signal the end of the day, that the headline act was still to come, and the magic of the evening could continue for another few hours.

As the crowd migrated to the main East stage, Foals brought the weekend to a climatic conclusion. Demonstrating the breadth of their own catalogue and why they have become such a festival staple, the Oxford band gushed about returning to play shows like these. 'Olympic Airways' provided the karaoke moment of the set and they even teased new material to the appreciative crowd.

After a difficult couple of years, live music is back in full force and the atmosphere at All Points East showed just how ready we are for it.